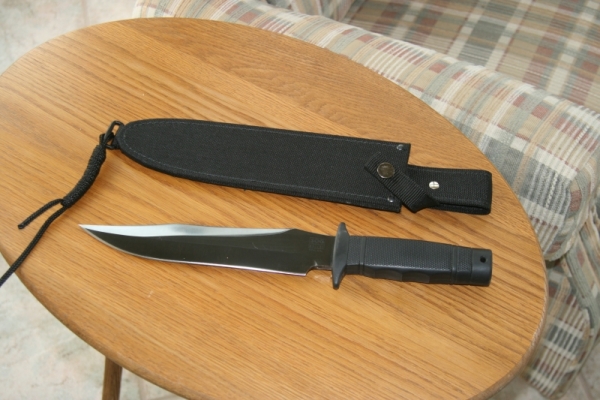 The darkest and largest knife SOG has produced to date – The Midnight Tigershark. Blackened and forged in the heart of SOG’s manufacturing plant in Seki, Japan, this knife was an exclusive production run for the “Cutlery Shoppe” knife company in the late 80’s, along with the ‘Nite Tech’. Its production ran side by side with the satin-finished Tigershark in SK-5 steel. It is identical in every aspect to the Tigershark SK-5 except that it us gun-blued. Under the gun-blue coating lies a satin-finish, which explains why the Midnight Tigershark does not have a shiny mirror surface like the S1 Bowie. It instead has a blackened finish that has low reflectivity and increased resistance to the elements. Originally named by SOG as the ‘Midnite Tiger’, the name “Midnight Tigershark” is perhaps more prevalent in the knife collectors circle though there exists the misconception that it was the actual name given by SOG. This knife is a winner from SOG, but sadly it is not appreciated much till after it was discontinued. Not many large bowies are gun-blued, and the Midnight Tigershark is one of those rare ones with a “tool look”.

It is not very easy to get one of these nowadays – quite a rare find since it was exclusive and produced in limited numbers. Most people would not have known about the SOG Midnight Tigershark if not for our SOG Collectors site. Having been discontinued for more than 12 years, it is highly prized among collectors. Even more difficult to find one that is Mint in Box (MIB). It is also considered rare because it is not known whether it became a regular production model from SOG. The Midnight Tigershark remains as one of the most sought after knives in the SOG knife series as well as the other Tigershark models.

Copyright © Notice: If you plan to use our information (eg. selling your knife on Ebay), please cite our website by saying “Information taken from: “http://www.sogknivescollectors.com” or mention our website.

Rarity index scale (1 to 10, 10 being the most rare):
1 – Very common; easily available on ebay, google product search and almost every knife selling website. Spammed with at least 10+ listings on ebay.
3 – Has been around for at least 2 years and are selling reasonably well, with retailers favouring other newer models over this knife.
5 – Knives that are on the borderline of being discontinued or have been discontinued for less than 6 months
6 – Products from 6 onwards are either discontinued or limited edition.
7 – Discontinued knives that pop up once every few months on the “For Sale” part of forums or on ebay. Still can be found at a few online shops though.
8 – Knives that need lots of researching to find. Not available anymore in online knife shops and pop up (if you’re lucky) >4 months for one at a time.
9 – Knives holding this rarity are the shadowy kind. You can’t find any information on them at all (not even from online knife shops that have not taken down that knife’s product page). If you see one for sale grab at all cost.
10 – The rarest of all knives. If 9ou hadn’t been here you wouldn’t even have known that it existed. Should you have one of these you better lock it up in a triple-combination safe and treat it like a family heirloom..

The latest from SOG Specialty, made exclusively for Cutlery Shoppe.We took the highly acclaimed SOG Tigershark and made it even better. Our new Midnite Tiger features a gun-blued carbon steel blade, Rc 55-57, with a faceted reinforced tip and a special “rolled edge”. The gun-blued carbon steel blade will resist corrosion and still retain the keen edge that quality carbon steel is known for. The Midnite Tiger also sports a full tang construction and an ergon/mic Kraton handle for comfort and reliability. To top this off, we have included a custom black Condura sheath from famous sheathmaker and knife designer, Blackle Corrs. This condura sheath includes a thigh tie-down and a Bianchi belt Mil Spec belt fasterner to accommodate military pistol belts. 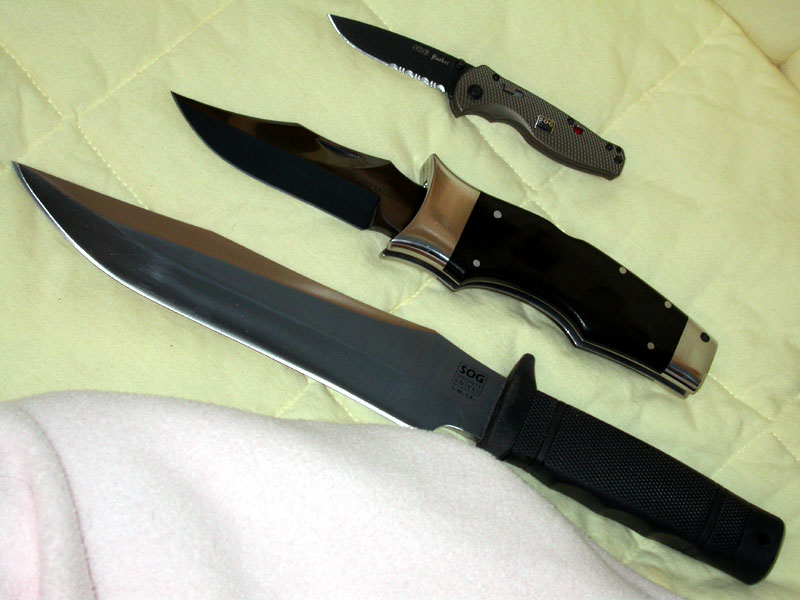